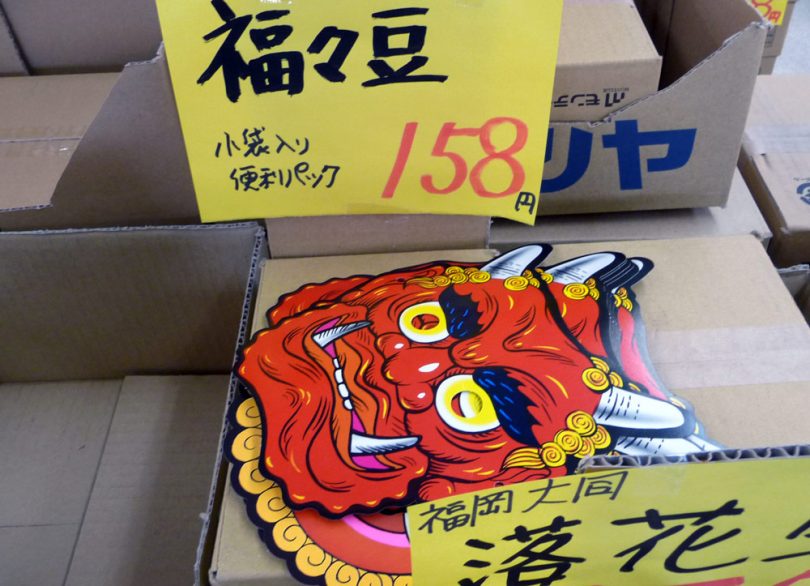 “Demons out, Good Fortune in!” – that’s today’s motto as it’s “Setsubun” (節分) today (February 3rd). It’s one of my favorite days of the year, so I thought I’d share it with you and tell you some more about it. 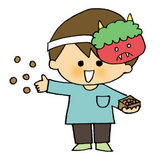 Well, what do you do on “Bean Throwing Day”?
Yeah, right! Obviously!

Step 1: Good fortune comes to those who’re eating in silence

You’ll have to eat your sushi roll while facing that direction.

Quite strict rules? Yes, but that’s why it’s fun!

I often eat it during work, so my co-workers try to disturb me so that I’ll talk before finishing my sushi roll! *g* 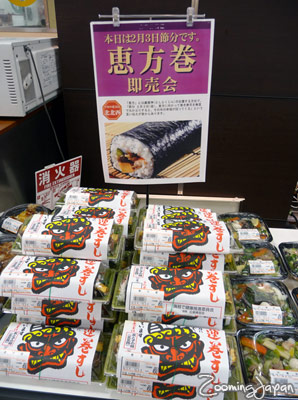 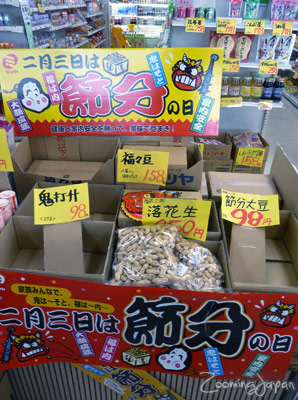 Step 2: Kicking demons out of your house by … throwing beans?!

This is the best part of it!!
“Setsubun” means that it’s splitting the seasons. Spring is about to come. So it’s time to clean your house.
No, not what you might think! Clean it from all the evil spirits and demons.

So, what you do is you throw beans. However, it can’t be just any beans!
It must be the super mighty “fortune beans” (福豆, fukumame) which are just … plain roasted soybeans, but whatever!

You don’t just throw them randomly, but usually a family member will wear a paper demon mask (which you’ll get in the supermarket together with the super duper “fortune beans”).
The rest of the family will throw beans at the “demon” shouting “Oni wa soto, fuku wa uchi” (鬼は外、福は内) which just means something like “Evil out, fortune in!”
Of course the “defeated” demon will run away then.

Usually you perform that in any kind of building, not only your house.
So, we also do it at my workplace, however no demons for us.
You can also just throw beans out of the windows and doors while shouting “Evil / Demons out!” and throw some beans inside shouting “Fortune in!”
It’s a big, BIG mess which is why it’s so much fun!
I mean, when can you usually mess up your workplace like crazy without being punished, right? 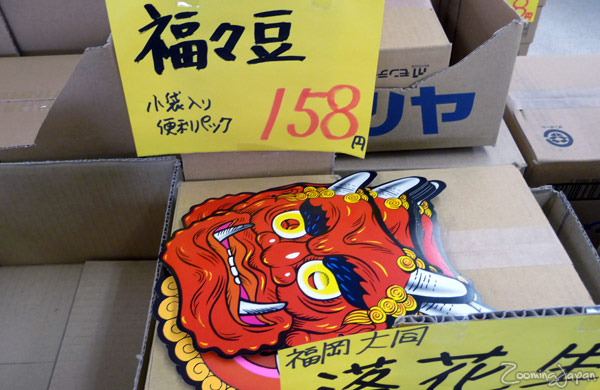 All the “Bean Throwing Day” beans were already sold out when I went to the supermarket around noon!

Step 3: Realize how old you already are!?

Hm, but what to do with all the leftover beans?
Don’t worry! Japan has found a solution for that as well!
You just EAT them!
As this is Japan we’re talking about, you probably have guessed it already.
You can’t just eat them, there’s a rule yet again!

And here’s where the fun stops … at least when you’re not so young anymore! :(
Why? Because you’re supposed to eat an amount of beans that equals your current age!
So, you sit there, counting the beans, realizing how old you are..
It’s even more frustrating when the younger co-workers around you can stop counting 10 beans earlier than you!

By the way, there are also various festivals at (bigger) temples and shrines on February 3rd.
Some might be accompanied by dances or taiko performances.
Traditionally there are festivals where priests or even celebrities (such as sumo wrestlers) throw beans, candies or even envelopes with money.

Nowadays “setsubun” is celebrated as part of the “spring festival”, but originally was thought of as “New Year’s Eve” where you have to get rid of the evil spirits of the previous year. This tradition has its origin in China and was brought to Japan in the 8th century.

Well then, how do you banish demons? Maybe by throwing candy?