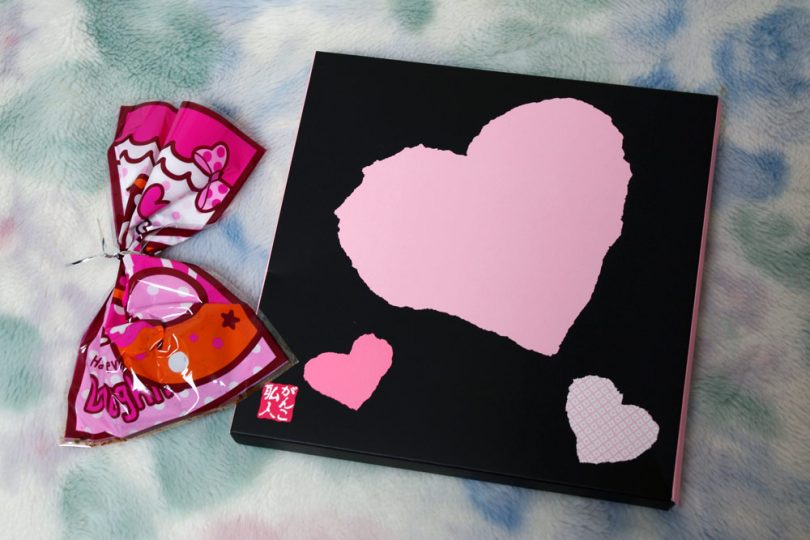 However, Valentine’s Day in Japan might be different from what you are used to.
First of all, it’s a Western “holiday” that Japan adopted and modified – similar to Christmas.

I’m mainly going to tell you from my own experience. I’ve experienced 7 Valentine’s Days in Japan. I don’t know if there are regional differences, but I doubt it.

Valentine`s Day is the day for lovers. You give your beloved ones something to show them that you care about them.
So far so good. That’s not really different in Japan! But what is different then? Read on to find out.

1. What is given on Valentine’s Day in Japan?

Chocolates. Period.
Valentine’s Day in Japan is a big commercialized event.
Around the beginning of February, basically as soon as “Bean Throwing Day” is over, you’ll see tons of chocolates in boxes everywhere! 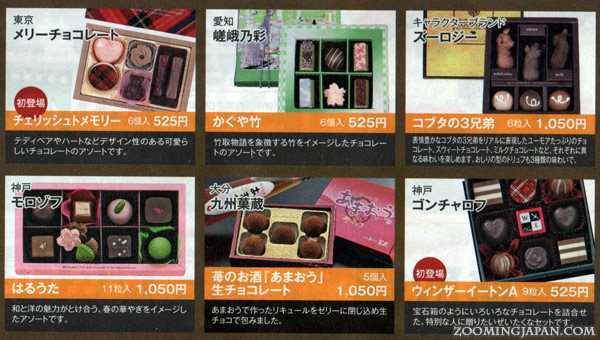 2. Who gives? Who receives?

The basic rule is that the woman gives something to the man.

If you don’t have a boyfriend / husband to whom are you giving it then?

Or, in other words, if you want to show you really like someone (your boyfriend / husband / crush), then you give them “honmei choco” (本命チョコ, “really mean it chocolate“).
Opposed to that there’s something called “giri choco” (義理チョコ) which literally means “duty chocolate” – and that’s exactly what it is.
I have no idea who came up with this stupid idea, but you’ll come across the “duty” thing in many other Japanese customs (e.g. “Japanese New Year Cards“).

I’m pretty sure that you’ve seen that in various manga or anime. There, Valentine’s Day is a really popular theme.

Maybe somebody felt sorry for all the guys who didn’t receive any chocolate on that day. Imagine you’re at your workplace and all the guys get chocolate, but you! Wouldn’t you feel miserable?

Well, to be honest I think it’s the chocolate industry that came up with the idea to get a lot of money ..

Advice: To your higher-ups or your boss you should give a bigger / more expensive box of chocolate. 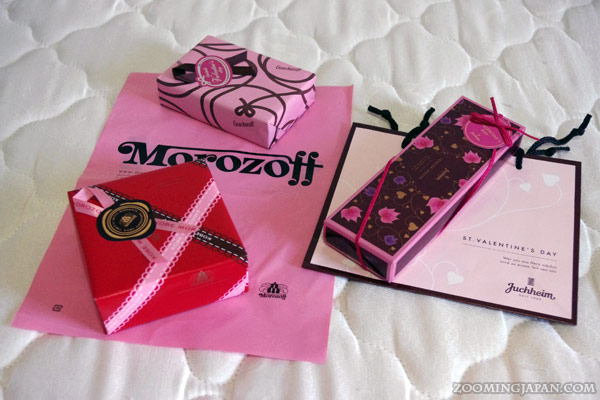 True fact: Morozoff Ltd. introduced the holiday for the first time in 1936, when it ran an advertisement aimed at foreigners. Later in 1953 it began promoting the giving of heart-shaped chocolates. Then, other Japanese confectionery companies followed suit thereafter.
The custom that only women give chocolates to men appears to have originated from the typo of a chocolate-company executive during the initial campaigns. Chocolate companies make half their annual sales during Valentine’s Day in Japan. (See? Told you!

3. And women don’t get anything? This sucks!

Wait! It’s true that they don’t get anything on Valentine’s Day, but Japan has come up with another “great” idea (read: how to squeeze even more money out of people): “White Day”

White Day is exactly 1 month after Valentine’s Day, on March 14th.
On that day men are supposed to give something in return to all the women who gave them chocolates.
When I first came to Japan I was under the impression that it’s gotta be white chocolate.
It’s not. It’s a small present. It can be anything, really. Often it’s food, snacks or something small and useful (e.g. towels, handkerchiefs, …)
It can be chocolates as well. There’s no rule, really.

Also, recently it has become pretty common to give chocolates to your female friends or classmates on Valentine’s Day in Japan.
I think that’s rather cute as it’s kind of unfair that only the guys get to eat all the delicious chocolate.
That is called “tomo choco” (友チョコ) and just means “friend chocolate“.

“Friend chocolate” I received from female students of mine.

True fact: In the 1980s the Japanese National Confectionery Industry Association launched a successful campaign to make March 14th a “reply day”, where men are expected to return the favor to those who gave them chocolates on Valentine’s Day, calling it White Day for the color of the chocolates being offered. A previous failed attempt to popularize this celebration had been done by a marshmallow manufacturer who wanted men to return marshmallows to women. (*source: Wikipedia)

Don’t worry, there is nothing on April 14th .. in Japan!
However, there is an informal custom in South Korea called “Black Day” as opposed to the “White Day”.
South Korea celebrates Valentine’s Day and White Day similar to Japan, but they are nicer to singles! If you didn’t receive or give anything on the previous two dates, then you can come together with single friends on April 14th to eat Korean noodles with black bean sauce called Jajangmyeon.
Black Day is not a bad day at all. It’s for celebrating your singledom!
I vote for adopting this event in Japan as well!

Have you ever given or received “love chocolate”?

I never have. I have given “duty chocolate” and received “duty presents” in return many times, though.
At first you think it’s kind of cute and you might even be embarrassed to give chocolates to your male co-workers. I made the mistake to emphasize that it’s ONLY “duty” chocolate, but that’s considered to be rude, obviously.
I just wanted to make sure that there are no misunderstandings!

After a few years it gets annoying. Why should you give something to people you don’t really care about all that much? Why spend a lot of money?