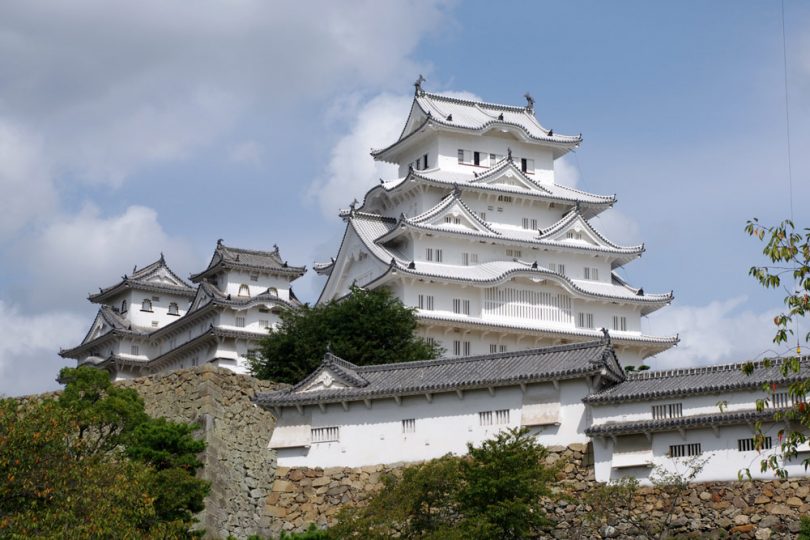 It’s probably not a secret that I’m a HUGE fan of Japanese castles.
At this point I’ve been to around 150 of them and there are even more waiting to be explored.
With so many castles around, it’s sometimes hard to choose which ones to visit.
It’s true that there are some pretty amazing castles in Japan, but did you know that only 12 of them are original Japanese castle keeps that have survived for centuries?

Why Are There Only 12 Original Japanese Castle Keeps Left?

During the Meiji Restoration, just like the feudal domains the castles came to an end. They were seen as symbols of the previous system.
In consequence, almost 2000 (!!) castles were either dismantled or destroyed. Many others were simply abandoned and fell apart after some decades.

The few castles that survived were then devastated through natural disasters (fires, quakes etc.) or through war.

Considering that, it’s actually quite amazing that some of the castle keeps were able to survive that long.
And it goes without saying that it makes them special. These are the oldest castles in all of Japan, some are dating back to the early 16th century.

While you might not be able to tell if it’s an original castle keep from the outside, you’ll know the second you’ve entered the castle.

Have you ever been inside a reconstructed castle keep (e.g. Osaka or Nagoya Castle)? You’ll notice how modern the inside is, most of those castles even have elevators.

In original castle keeps you can smell how old it is. Everything is wooden, the ceiling is often very low and the stairs are old and it might be difficult to climb up those stairs to the top floor. Note that those original castle keeps aren’t barrier-free.
Needless to say that you have to take your shoes off before entering.

Where Can You Find Those 12 Original Japanese Castle Keeps?

Among Japan’s 4 major islands, you can only find them on Honshu, Kyushu and Shikoku. There are none on Hokkaido or Okinawa.
Mainly those castles that were at no strategic points or hidden close to the Japanese Alps were able to survive bomb attacks during the wars.

Shikoku is relatively small compared to Honshu and yet you’ll find a lot of the original castle keeps there. Shikoku is always worth a visit, all the more if you’re hunting down the oldest Japanese castles.

In the following, I’ll introduce the 12 remaining original Japanese castle keeps in detail. While the castle keep construction was finished in 1611, it was completely destroyed again in 1627 when lightning struck and caused a fire. The current tenshu was finished in 1811 with a height of only a bit over 14 m. The castle features 3 surviving towers from the Edo period and 5 gates. These together with the main keep are a National Important Cultural Property.

The castle grounds are one of the most famous cherry blossom viewing spots in the Tohoku region and especially popular because of the castle moat which is then filled with cherry blossom petals. Unfortunately, the sakura are in full bloom during Golden Week there, so it’s usually very crowded. It’s probably the castle that matches the image of a typical feudal Japanese castle the most. The “Crow Castle” – as it’s also called due to its black exterior – still has its original wooden interiors and external stonework.

Unlike most of the other castles you’ll come across in this post, Matsumoto Castle wasn’t built on a hill or near a river, but on a plain. It’s a typical flatland castle. That’s why it’s surrounded by a large moat where the castle keep is being reflected on windless days.
With the snow covered Northern Alps in the background this is also one of the most picturesque castles. Maruoka Castle (丸岡城) is located on the top of a small hill in Fukui Prefecture.

It’s a bit farther away from the popular tourist routes. Its nickname translates to “Mist Castle“. According to a legend the castle was protected by a thick wall of mist whenever enemies tried to approach. With only 3 levels Maruoka Castle is one of the smaller castles, but claims to be the oldest in Japan – same as Matsumoto and Inuyama Castles.

As most castles it’s now a popular cherry blossom viewing spot in spring. Another original Japanese castle keep is Inuyama Castle (犬山城) which is located on a small hill in Gifu Prefecture and can easily be visited as a day trip from Nagoya.

It’s a rather small castle next to the beautiful Kiso River. In 2018 it received the title of National Historic Site. It’s not clear when the construction of the castle keep was finished, but it claims to be the oldest in Japan, but the official honor goes to Maruoka Castle (see above). Hikone Castle (彦根城) is located in Shiga Prefecture. That means there are two original castle structures in Kansai not too far from each other. The other one is the famous Himeji Castle. You can visit both easily as a day trip from Kyoto or Osaka.

The castle would have been dismantled like many others during the Meiji era, but a request from the Emperor himself kept it intact. Personally I simply like the look of Hikone Castle a lot which makes it one of my favorite among the 12 originals. Also, if you’re there make sure to visit the nearby garden “Genkyuen” which also offers nice views of the castle.

Extra tip: Not too far away is the beautiful Lake Biwa, so if you have time make sure to check it out. It’s probably one of the most famous castles. Many say it’s also Japan’s most beautiful castle. It recently went through massive restoration works (2010-2015). As it’s an original castle keep only a few experts are allowed to lay hand on it and so it took several years.

The castle also goes by the nicknames “White Egret Castle” or “White Heron Castle” because the exterior is shiny bright white which became especially apparent after the restoration works were done.

Among all the listed castles here Himeji might be the one that’s easiest to access. Himeji has its own Shinkansen station and it’s also on the main Shinkansen Line from Tokyo to Hiroshima.

There’s a lot to tell about Himeji Castle, but that’s for a separate blog post. It’s the castle I’ve visited the most, probably well over 100 times, simply because I used to live nearby and I really considered myself lucky to have this beauty around the corner. Although it’s a too obvious choice it’s my favorite among the 12 castles. There’s so much to explore, the huge park and moat surrounding the castle and the fact that it was my “home castle” are to blame. 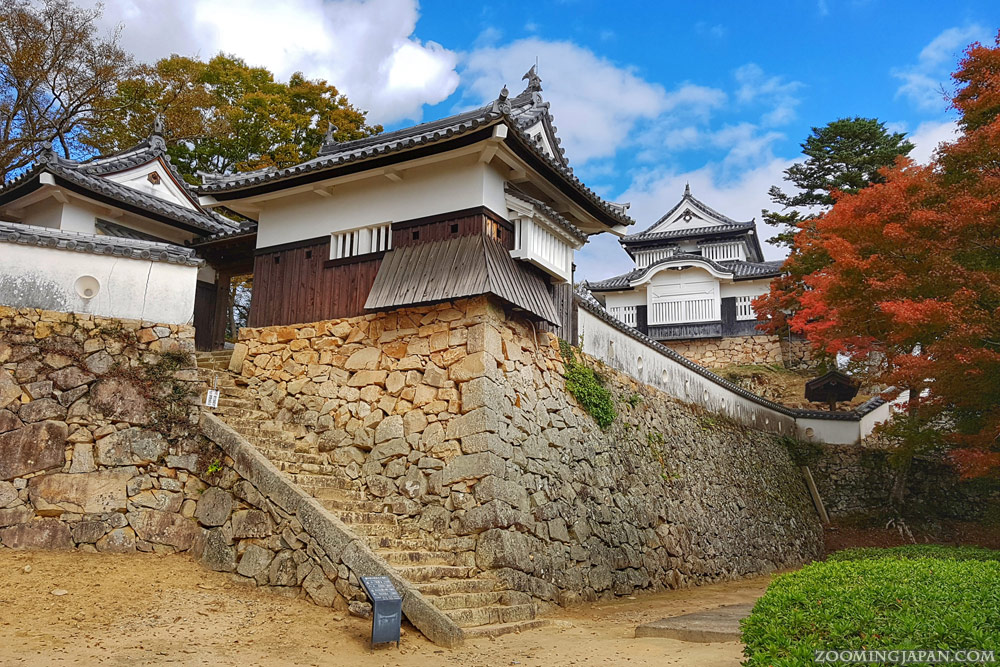 Bitchu-Matsuyama Castle (備中松山城) is located in Okayama Prefecture.
A lot of people know about Okayama Castle, but that’s not an original castle keep. Although it’s definitely worth a visit!

Unfortunately not many know about Bitchu-Matsuyama Castle which is a shame. It’s certainly worth a day trip from Okayama City.
I visited twice already. While it’s not the oldest among the 12, it’s by far the highest with 430 m above sea level! You will have to hike up a bit, it’s certainly not barrier-free.

The remaining castle walls leading up to the keep are impressive. I recommend going in autumn when the leaves color everything in bright red. These days there’s even a cat greeting you on your way up if you’re lucky!

Extra tip: In the autumn months you should get up very early to experience the “castle in the sky“. From a viewpoint further away the castle is then surrounded by a sea of clouds. Unlike most of the other castles, this one is not on the top of a hill. Sitting next to Shinji Lake it’s one of Japan’s great lake castles. One of its nicknames is “Black Castle” for obvious reasons. Unfortunately it’s not taking any of the “top” spots among the 12 original Japanese castle keeps. It’s only the 2nd largest and 3rd tallest. 5 of the 12 castles are older than this one.

As it’s one of the bigger castles, you’ll find a lot of interesting exhibitions inside, so take your time exploring.

Extra tip: In Shimane you’ll also find the famous Izumo Taisha, so it’s definitely worth taking a trip there to check out both, the shrine and the castle. Marugame Castle (丸亀城) is located in Kameyama Park, Kagawa Prefecture.
This and the following four original castles can all be found on Shikoku. If you want to visit as many original castle keeps as possible, then Shikoku is the best destination for you.

Marugame’s wooden keep is on a hilltop. Many of the other buildings were destroyed during a fire in 1869, so apart from the keep and some stone walls most other facilities of the castle don’t stand anymore.

It’s especially beautiful in spring as the castle park has a lot of cherry blossom trees. Let me tell you that the view from the castle top is simply stunning! This castle is also on a hill. It’s a relatively small castle keep which was built after the famous Battle of Sekigahara in 1600. While there were major restoration works going on (1948-1959) it’s the only castle among the 12 originals that still has both intact: the castle keep and its palace (= the residence of the local daimyo).  Only Kochi Castle still has all original buildings standing in the honmaru (= the innermost ring of defense of a castle).

Extra tip: Make sure to eat Katsuo when in Kochi. If you’re a fan of Studio Ghibli, then please know that Kochi Castle was shown in the background during the class reunion of the movie “Ocean Waves“. Matsuyama Castle now stands tall on Mount Katsuyama, but the keep was once struck by lightning and burned down in 1784. The castle is famous for it’s doorless gate which leads to another heavily armed gate.

Even if you aren’t interested in castles at all, it’s worth a visit as it’s a popular cherry blossom viewing spot in spring. It’s yet another hill castle. The construction finished in 1601. Personally I like the tiny, compact style of the castle a lot. It’s probably the tiniest among the 12 originals, but certainly also among my favorites. Apart from the castle keep not much remains. In WWII the Ote Gate was destroyed by American bombs.

You definitely need more than one trip to Japan to cover them all!

All of these 12 original Japanese castle keeps are completely different in their outer appearance, so it’s definitely worth to visit them all. As they’re spread throughout all of Japan, it’s usually not possible to visit them all during just one trip. Luckily some of them are located conveniently in the same region. At least you’ll have yet another reason to come back to Japan!

As you can tell I’ve been to some of them more than once. The weather wasn’t always the best as you can see in the photos. If I could only choose one, I’d want to re-visit Hirosaki Castle as a typhoon hit right before I visited and all the cherry blossoms were gone then.

Have you been to any of the 12 original castle keeps yet? If so, which one was your favorite?