I’m pretty sure that everybody who has ever been to Osaka knows about the popular district called Dotonbori.
It’s in the shopping area close to Namba Station. Actually you can walk all the way from Namba Station to Shinsaibashi Station (subway).
There are MILLIONS of shops, cafés, restaurants, game centers, host clubs ETC. and as there’s a roof on top of the “shoutengai” (shopping arcade) you can go there anytime.
A lot of the bigger shops (e.g. Tsutaya) are open until midnight and restaurants, game centers etc. are open even after midnight, so this is one of the districts that is “alive” and busy at night as well.

I’ve been there many times and it’s really great for shopping or eating local food (okonomiyaki and takoyaki for example).

In front of Namba Station.
I especially like the “Manner Station” for the smokers ;P

I went on a Sunday, so obviously there were a lot of people. As it wasn’t dark yet, it wasn’t that bad. I had the feeling it got busier, the later it was!

Apart from the main shopping arcade road, I recommend that you try to lurk into the smaller side streets to the left and right, because the atmosphere there is really nice and it’s less crowded (and cheaper if you want to eat!).

You will come across all sorts of interesting and weird things!
I thought those statues next to a Lawson convenience store were hilarious!

Walking through the long, long shopping arcade, getting closer to the Dotonbori River area.

Still peeking into the side streets every now and then … slowly getting hungry because everything smells so good!

There are so many things on the way that will distract you, though.
Game centers (oh, how I hate (and love) thou ufo catchers!!!)

Yeah … I’m not sure what caught my eye initially. Was it the guy with the huge cook’s hat or the foaming soap!?

Well, at some point I finally arrived at the Dotonbori River area.
You can easily see the huge advertisement featuring Fukuyama Masaharu. He became so famous after being in the historical drama “Ryomaden” about Ryoma Sakamoto.
All my coworkers were all over him. I actually liked him better in Galileo (which he did before Ryomaden). And his songs are nice, too.

See? There are always a LOT of people at night!

Reflection in the Dotonbori River. 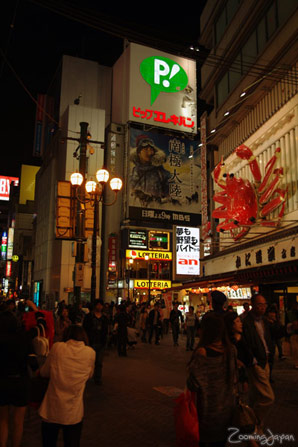 Entering the side street with all the yummy restaurants and their cute, huge and interesting “mascots”.
But first I spotted this huge poster of “Nankyoku Tairiku“. I really love this drama!

There are so many interesting things to see. Basically you can stop in front of each restaurant and take photos.
Many Japanese people do the same!! You shouldn’t do it when you’re hungry, though. It smells so, so good everywhere!
Eat first, then take photos!! *g*

Takoyaki (fried octopus) or fuku (blowfish)? So many things to choose from!!

Sushi? Okonomiyaki?
Personally I just love okonomiyaki way too much to resist! And Dotonbori is one of the best places to eat okonomiyaki! There’s so many different kinds that I’m sure you’ll have a hard time deciding what you wanna try in the end!

Ramen .. takoyaki again … and a lot of dragons!

So many interesting, weird and cute things to discover, really!

What are your favorite shopping spots in Japan?