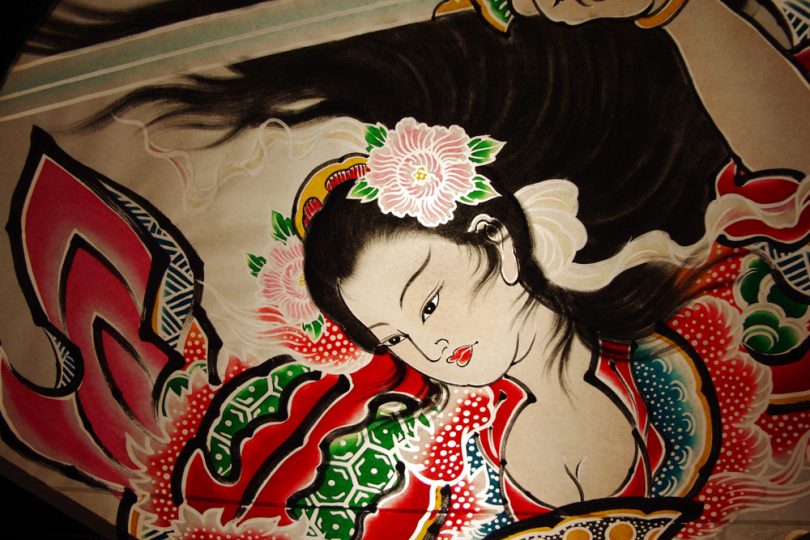 If you have a look at this map that I scanned for you, you’ll see that the closest gate to access the Village is the “North Gate (Kamenokomon Gate). 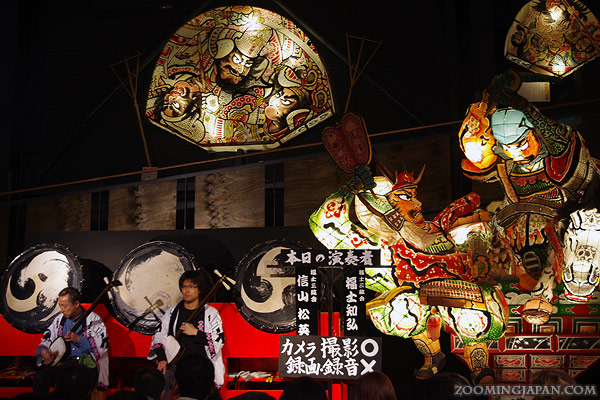 The Neputa-mura consists of various different facilities. My first stop was the “Hirosaki Neputa no Yakata Museum“. Right at that time there was a shamisen performance. It was really nice!

The sign on the right says that taking photos is ok, but any video or voice recording is not. 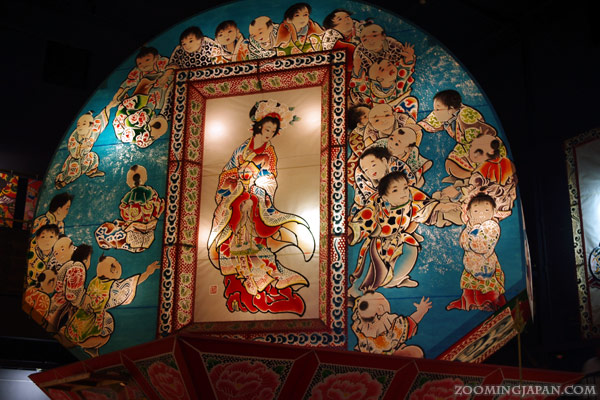 During the week of the Hirosaki Neputa Matsuri, a celebration held each year from August 1st to 7th, the townsfolk of Hirosaki parade about 60 large lanterns down their streets. 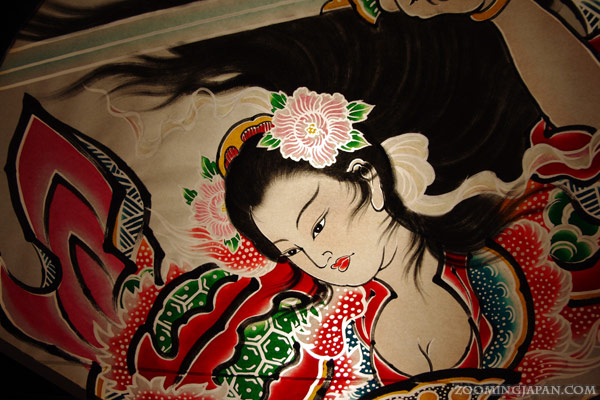 The festivals of Aomori Prefecture can be broadly categorized into two types, the “Hirosaki Neputa” and the “Aomori Nebuta“. 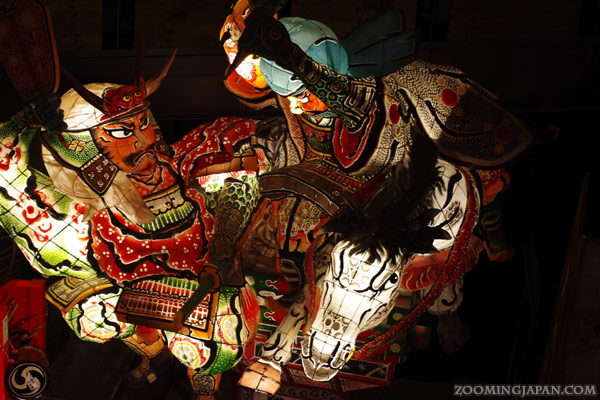 The Aomori Nebuta is a light-hearted festival. The festival goers skip merrily and dance to hayashi music through the streets, carrying with them giant doll-shaped floats. 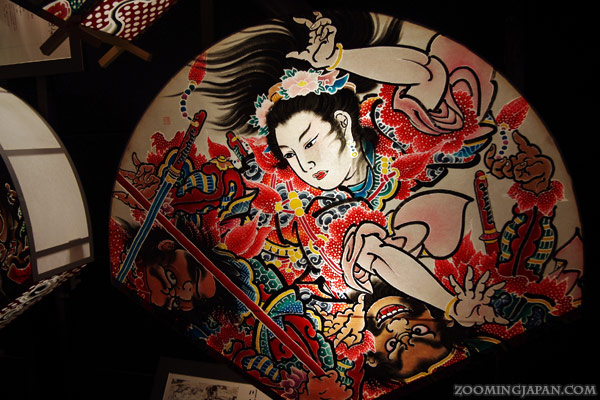 The Hirosaki Neputa is more somber and stately. The festival goers walk slowly through the streets, carrying along what looks like giant fans. 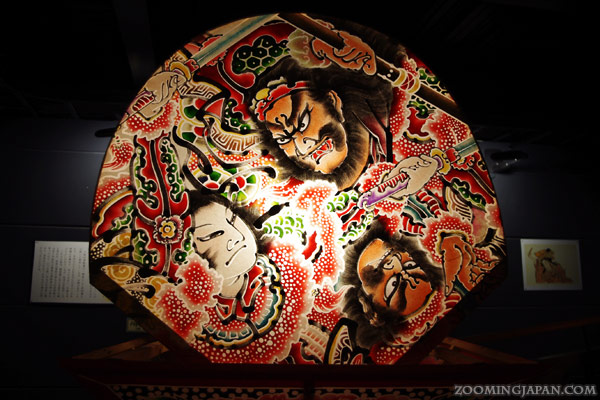 Though very different both festivals are designated as important intangible folk cultural assets of Japan. 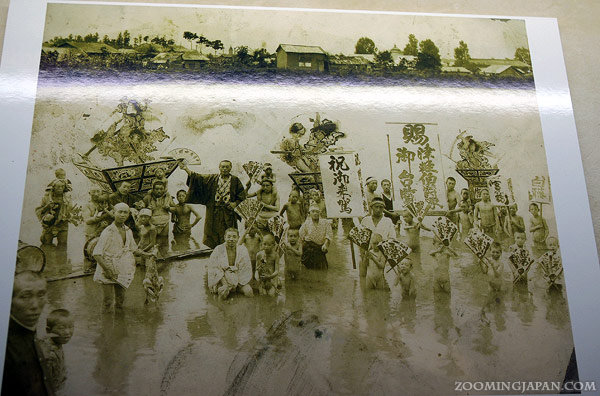 It is said that the festival emerged from a custom of ancient farmers. When the farmers became sleepy, they neglected their duties and sometimes suffered accidents. To avoid this they placed small lanterns on the river, vessels to carry their sleepiness downstream. 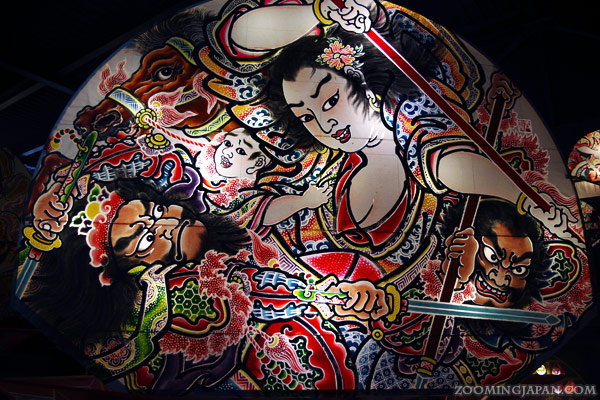 Over the years, the custom gradually evolved into a festival. 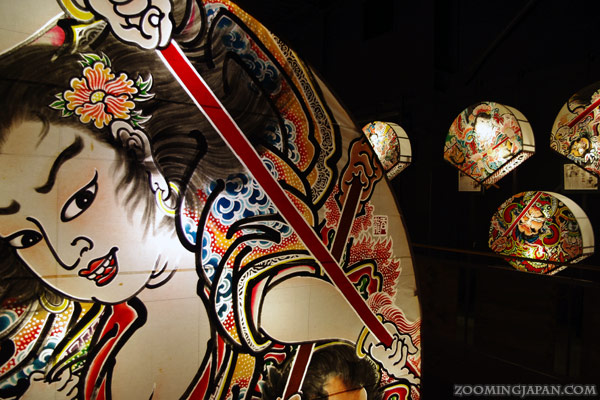 The word “neputa” is said to have derived from “neputee” and “neputejaa“, two words for drowsiness in the Tsugaru dialect. 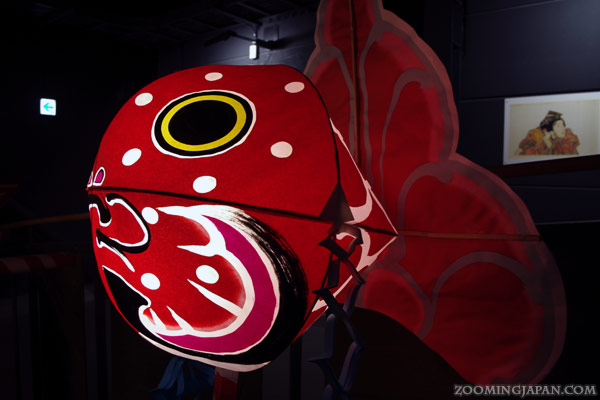 This is modeled after the Tsugaru Nishiki, a goldfish species unique to Tsugaru. The goldfish has been revered as a harbinger of good luck from ancient times. From about 1760, commoners popularized the image of the goldfish by producing the neputa. Nowadays the children of Aomori parade these goldfish lanterns through the streets during the Neputa Matsuri. 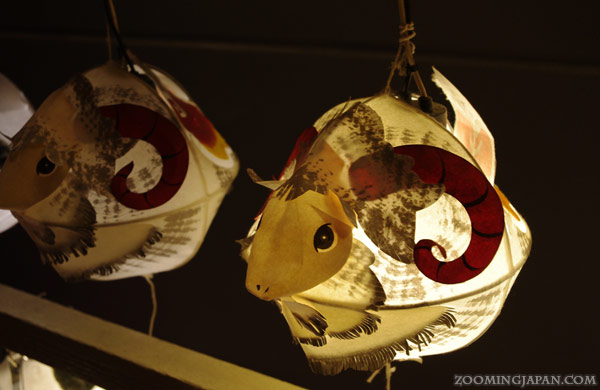 Besides the goldfish there are many other cute animal lanterns nowadays. 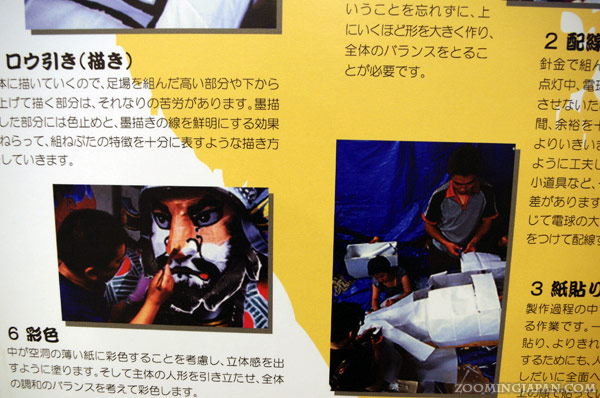 In the “Neputa no Ma” (Neputa Corner), you can find festival gear and floats from all around Aomori Prefecture as well as a lot of information about the festivals. 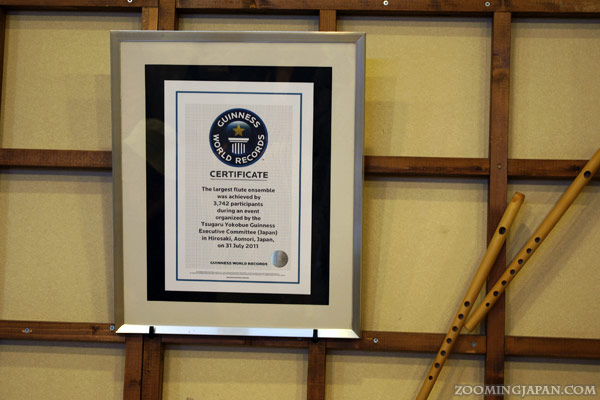 In July 2011 the people of Tsugaru actually managed to get an entry in the Guinness World Records having the largest flute ensemble with 3742 participants! 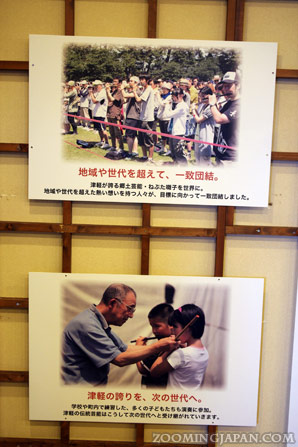 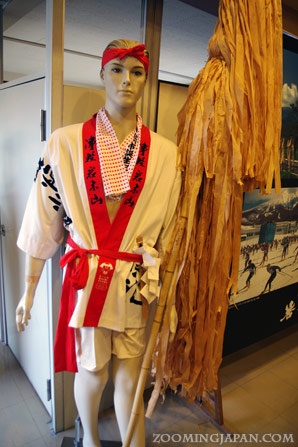 On the left you can see some photos of the time when they tried to break the record.

On the right you can see traditional festival clothes. 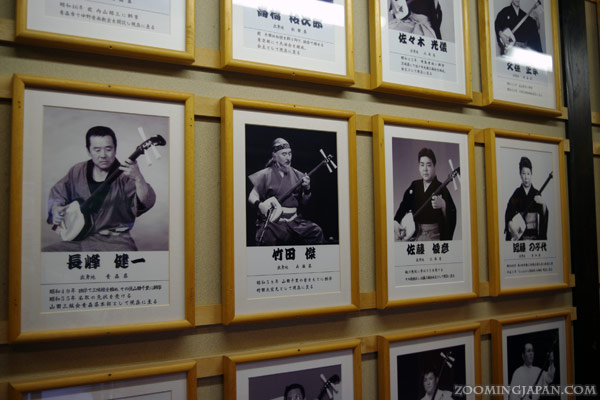 In the “Sangendo Hall” you’ll find everything about the Tsugaru Shamisen.

The shamisen of Japan is said to have originated from the Chinese sanshin, a three-stringed lute made from snake-skin, introduced into the Ryukyus (now: Okinawa). In the latter half of the 16th century it crossed the sea and landed in a city of flourishing trade known as Sakai (Osaka). 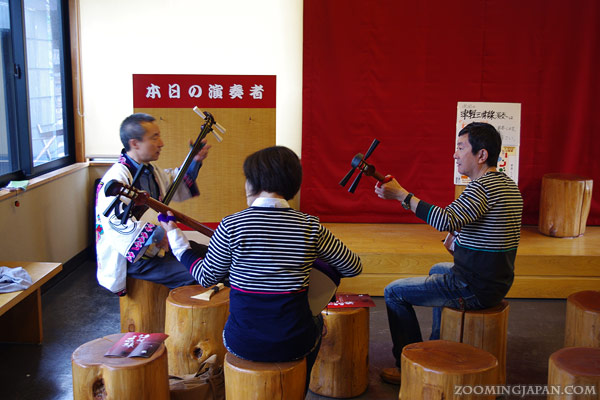 As the shamisen spread to different parts of the country, it slowly evolved in design and form.

(You could also take shamisen lessons there.)

Today the Tsugaru-Shamisen is considered a leading art and culture of not only Tsugaru, but all of Japan. 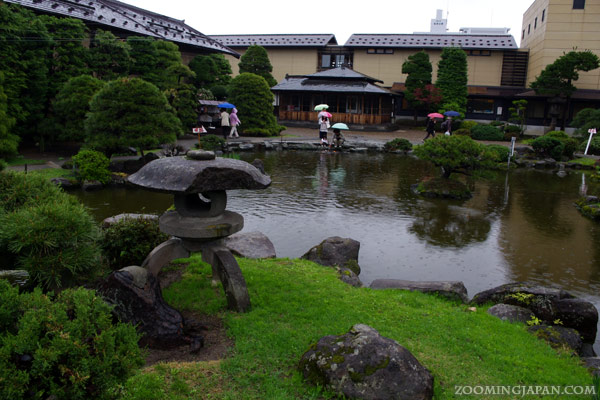 Yokien – a Japanese-style garden built between 1880 and 1914 with methods unique to the Tsugaru District. 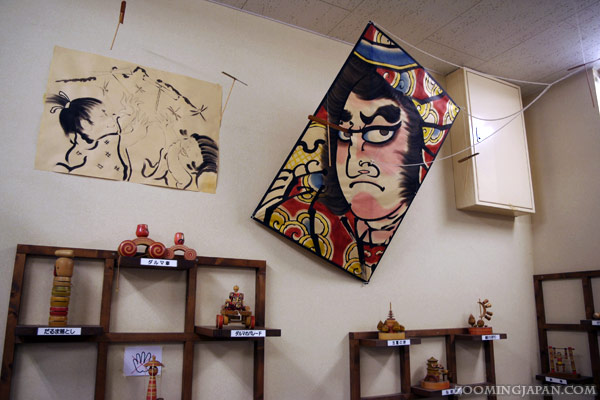 Here you see the “Komadokoro“, the hall for spinning Japanese tops.

In the background you see a “Tsugaru Dako“. Those kites were first produced as children’s toys by lower-class samurai forced to take on side jobs to get some money. Most of the kites are illustrated with pictures of heroic feudal warlords. Instead of the bamboo frames typically used for Japanese kites, the frames of the Tsugaru Dako are made of hiba, a Japanese cypress indigenous to Aomori. The Tsugaru Dako is considered one of the three finest kites of Japan, together with the Rendako (a train of kites) of Nagasaki and the o-Dako (giant kite) of Shirone.

I also bought myself a kite there as souvenir. 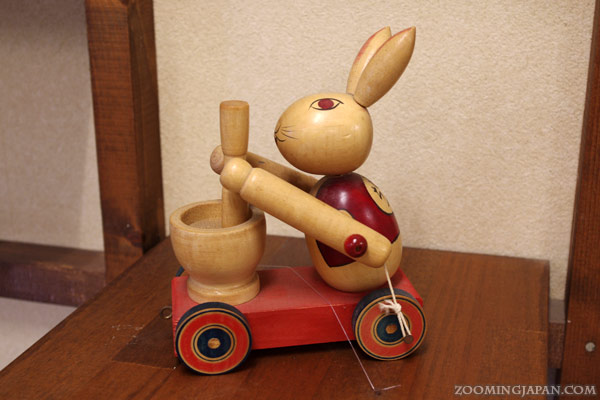 They also demonstrated the spinning of all kinds of kawari-koma (novel tops), including the Zuguri, a unique top from Tsugaru (not pictured). 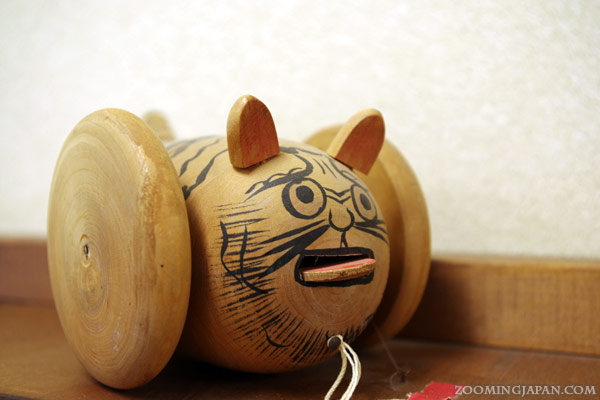 At last you’ll also enter a workshop where you can watch people producing the folk handicrafts of Tsugaru such as the tops, kites as well as pottery and kokeshi dolls.

My next stop was Hokkaido! One of the 4 big Japanese Islands and the biggest prefecture in Japan.
So, I spent the next day in Hakodate and Matsumae to visit the great castle there.

Access:
Take the Konan Dote-machi Loop Bus from Hirosaki Sta. and get off at “Bunka Center-mae” (13 mins, 100 yen). From there it’s a 8 mins walk. There’s also the Tamenobu Loop Bus which runs directly to the village. Note that the bus only operates from Apr 1 to Nov 30!
Please note: Prices as well as opening hours / holidays are subject to change. Please make sure to follow the provided link to the official website to check out the latest updates.