Kawasaki Daishi Temple was founded in 1128 (Heian Period 794-1185, 平安時代) as the headquarters of the Chizan School of Shingon Buddhism (真言宗, Shingon-shuu). It is dedicated to the famous monk and scholar Kobo Daishi (弘法大師, see also Mt. Koya). 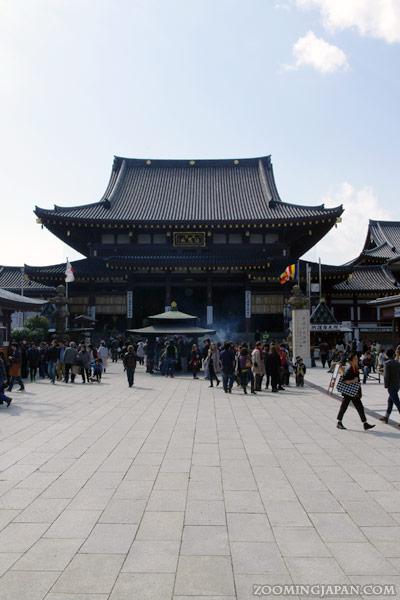 Dai-Hondo (大本堂):
In the photo above you see the Main Hall of Kawasaki Daishi Temple. Unfortunately the original construction was destroyed by fire during WWII (April 1945).
The hall was rebuilt in May 1958. Its current construction is made of steel and concrete in the architectural style of the Heian period. Inside you’ll find the image of Kobo Daishi.

A brief peek into the Main Hall.

Dai-Sanmon (大山門):
To celebrate the 850th anniversary of the founding of Kawasaki Daishi the main gate (Dai-Sanmon) was built in November 1977. You’ll find images of the Four Heavenly Kings (四天王, Shitenno) and Yakushi Nyorai (薬師如来, The Medicine Master Buddha) there.

Kawasaki Daishi Temple is dedicated to Kobo Daishi through and through. Even the ema (wooden wishing plaques) feature his image.

This statue of Kannon accompanied by Buddhist angels, deer and doves was built to fulfill the Head Priest’s wish for eternal peace in the world.

The octagonal five-storied pagoda was built in 1984 to celebrate the 1150th anniversary of the death of Kobo Daishi. The octagonal shape of the pagoda looks almost like a circle and symbolizes receptiveness and completeness.

To celebrate the 1200th anniversary of Kobo Daishi’s birthday this statue of him was set up in 1973.

This hall is also known as “Yakushi-den” (薬師殿, Yakushi Hall). A statue of Yakushi Nyorai is enshrined here, so people can pray to recover from illness. On top of that you can pray for safe driving and buy various o-mamori (お守り, lucky charms) to put into your car. While this hall also belongs to the Kawasaki Daishi temple complex, it’s a bit farther away (a few minutes walk) from the other facilities.

As it was a Sunday and also the day of the Kanamara Matsuri, there were a lot of (strange) people around. The funny men here are dressed up as “Daruma” and once you scroll down to the next photo, you’ll understand why!

The street is about 200 m long, but it will be hard to walk straight to the temple, because there are so many interesting little stores selling rock sweets, Kuzu Mochi (葛餅) and lucky pot-bellied Daruma dolls! It’s rare to see so many Daruma (達磨) in one spot, so it’s a great chance to buy one as a souvenir! As you can see in the photo they come in various sizes and colors, but the traditional color is red. They are seen as a symbol of perseverance and good luck.