I guess it’s not a secret anymore that I’m a huge Okinawa fan. Okinawa is so beautiful and all the tiny, remote islands are great for diving, snorkeling, swimming, kayaking or just relaxing.
Previously, I already recommended the Yaeyama Islands, but for snorkeling the Kerama Islands are probably your best choice.

The Kerama Islands (慶良間諸島, Kerama Shoto) consist of 22 smaller islands southwest of Okinawa’s main island. As far as I know only four of them are inhabited: Zamami, Tokashiki, Aka and Geruma (and I’ll introduce all of them to you).

In 2014 – quite recently – the Kerama Islands were designated as national park under the name “Kerama Shoto Kokuritsu Koen” (慶良間諸島国立公園). The islands gained this status because of the amazing coral reefs. There are about 400 different types of corals, e.g. table and branch corals.

This also explains why snorkeling is a great experience there.

I didn’t know it became a national park, so I was really surprised by the large number of tourists outside of the main season. I went there in October.
I prefer remote islands where I have the feeling I’m the only one on the whole island (like Yonaguni).
However, the good thing about this recent “upgrade” to a national park is that there’s a lot of information in English. They even hired an English native speaker for the tourist information office on Zamami Island. It will be a lot easier for foreign tourists to visit now.

The most common way to access any of the (inhabited) islands is to take a ferry boarding from Naha’s Tomari Port.

The ferry schedules might change, so make sure to check the official websites for more information. Required times are roughly:

I highly recommend you reserve a seat a few days BEFORE your departure. Although I went outside of high season, there weren’t any seats available anymore. Foreign tourists who were lining up in front of me were put on the waiting list. Luckily I had my tickets reserved in advance.
You can always cancel if you need to, but your trip might be ruined if you don’t get any ferry tickets!

I want to introduce the three “main islands” you should visit as they all have their own charm. I couldn’t really tell you which one is the best. If possible you should take a few days, stay on one of the islands overnight, and visit all of them.

Zamami Island (座間味島) is about 40km southwest of Naha. By ferry it’ll take about an hour to get there from Tomari Port.

While it is the largest island among the Kerama Islands, it’s still a rather small one. You can easily walk to most spots of interest.

It’s also possible to rent a bicycle, scooter or a car. But keep in mind that the number of cars that can be rented is very limited. If you need one, make sure to reserve one in advance. The people of the place where you’re staying can help you out with this.

There are some lovely observation spots, but you need to climb steep hills to get there. In the summer months it might be too hot to walk or bike there, so you might prefer a scooter or car.

There are two main beaches which are both great for swimming and snorkeling: Furuzamami Beach and Ama Beach.

It’s one of the most famous beaches of the Kerama Islands. You could walk or bike there from the port (~ 1.4 km, 20 mins walk), but there are also small buses that will pick you up for free if you rent some gear at the beach. You can rent pretty much everything you’ll need including snorkeling equipment.

There’s a lovely white sand beach and a nice coral reef. In my opinion it’s not the best beach for snorkeling.

There is also a small house with 2 restaurants where you can find other tiny necessities such as sunscreen (though a bit expensive).

Compared to Furuzamami Beach the sand isn’t as lovely. There are also no restaurants or any other facilities. But there’s a bathroom and shower on the nearby campground.

Ama Beach is about 1.5 km away from the port and it’s the opposite direction from Furuzamami Beach. So, if you want to visit both beaches, they’re about 3 km apart from each other.

It’s a great beach for snorkeling if you’re interested in seeing sea turtles close-up. The sea turtles that visit Zamami Island include green turtles, hawksbill and loggerhead turtles. From May to September they crawl on beaches at night to lay eggs.

I was lucky and got to see two huge ones right after I entered the sea. You can observe them while they’re eating. It was a GREAT experience.

You can also see a lovely sunset from Ama Beach.

Humpback whale watching is also possible between December to April. Zamami Village claims a 90% probability to see whales during that season.

As I went in October it was unfortunately not possible.

Most accommodations and restaurants are near the port. Just walk around to find a nice place to eat dinner.

At the tourist information office (right next to the port) they’ll also hand out a pamphlet with all the necessary information in English. There are also super tiny supermarkets where you could grab a bento for lunch.

I really liked the Ghibli inspired accommodation(?) I came across. *points at the photo above*

The Maririn dog statue is facing nearby Aka Island where another dog statue (Shiro) is located.

There’s actually quite a lovely story behind this. Maririn and Shiro were two dogs in love, but then Shiro moved to Aka Island. In order to see Maririn again, he swam to Zamami, taking breaks on the samller islands in between. They later had three little puppies together. Shiro is famous as the “dog who was in love”. Their story was even made into a movie.

Aka Island (阿嘉島) is only 10 minutes away from Zamami by speedboat. In my opinion it’s the most beautiful among the inhabited Kerama Islands.

Right next to the port you’ll find Shiro’s statue which is facing Maririn’s direction, of course.

Aka Island (left) is connected to Geruma Island (right) through the “Aka Ohashi Bridge“.

The best way to explore Aka Island is on a bicycle. If you want to go to the few observatories, it might be a bit tough as there are many steep hills.

Aka Island was rather quiet. There are less tourists than on Zamami and most people stay overnight on Tokashiki or Zamami, not on Aka. If you want a more “remote” feeling, then Aka would probably be your best choice.

Nishihama Beach on Aka Island

This is the main beach and it’s also a great spot for snorkeling. It’s about 1.5 km from Aka Port, so many people walk or bike there.

It’s not as convenient as Furuzamami Beach on Zamami Island as any facilities are a bit farther away and there are certainly fewer people as well.

But the beach offers very clear water, so on days when the ocean isn’t rough, you can see tropical fish even without snorkeling.

Only on a few islands (Aka, Geruma, Fukaji and Yakabi) you’ll find a unique type of deer called “Kerama deer” (a subspecies of the Japanese deer). They’re rather small compared to the deer of Honshu. They tend to have a darker body color and lack clearly visible spots of mainland Japanese deer.

They’re actually swimming between the islands. If you’re especially lucky you might get to observe that.

Once you’ve crossed the bridge I’ve mentioned earlier, you’re on the even smaller Geruma Island.

There’s a tiny school building (Geruma Elementary and Junior High School) and I thought this must be one of the most awesome locations for a school EVER!

If you cross yet another bridge you’ll get from Geruma to Fukaji Island. It’s a super tiny island with not much to see, but the Kerama Airport.

I don’t have much information about the airport. It doesn’t seem to be used often anymore. The building was open, but nobody was there.

There’s also a nice observatory (Fukaji Observatory) not too far from the airport on Fukaji Island.

For your reference it’s about 4 km away from Aka Port.

There are other small uninhabited islands between Aka and Zamami where diving or snorkeling is possible. Enquiries can be made at the villages’ tourist information offices. I went snorkeling around Agenashiku Island and it was truly amazing!

Besides whale watching, swimming, snorkeling and diving you can also go kayaking at certain spots.

Tokashiki Island (渡嘉敷島) can be reached by ferry either from Tomari Port (Naha) or Zamami / Aka Island.

Many people just go there for a day trip from Naha.

I went there in the morning leaving from Zamami and left in the late afternoon to head back to Naha. I had a rental car so that I could see the whole island in a few hours AND do some snorkeling. I was satisfied with the amount of time I had, but I also wish I could have stayed overnight for some more snorkeling.

Aharen Beach is one of Tokashiki’s main beaches and I was truly amazed once I arrived there. I went there in the early morning and had the whole beach to myself. I had the BEST snorkeling experience there. Without any effort you’ll be able to see tropical fish and breathtakingly beautiful coral reefs. You don’t have to swim far, just a few meters are enough.

But it is a very popular beach, so after 9 a.m. it got a bit busier.

The photo above was taken from a nearby hill. I had no difficulties as I rented a car, but you could also go there by bicycle – or even walk if you have the time.

There’s a nice observatory near the Aharen Lighthouse, but it’s a bit far if you don’t have your own vehicle.

In the afternoon I went to the opposite side of the island.

In the photo above you can see part of Tokashiki Port.

If you drive further up, you’ll reach the “National Okinawa Youth Friendship Center“. If you go beyond that, you’ll find yet another nice observatory.

However, I only recommend going there if you have a car. It’s a long and steep hill. 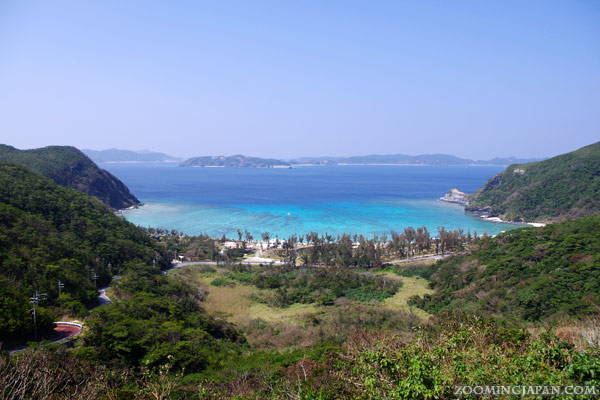 On the way from Aharen Beach to Tokashiki Village you’ll get an AWESOME view of Tokashiku Beach.

This is the other easily accessible beach of Tokashiki Island. It’s closer to Tokashiki Port than Aharen Beach, but it’s not as great for snorekling as the latter.

There are some facilities there and even a hotel. You can shower either in the public shower room or in the hotel, but both will cost you a bit (~ 200 – 500 yen).

There are also various smaller beaches and a few observatories which you can reach through hiking trails. Even if you decide to stay a few days, you won’t get bored. If you don’t want to get wet, then there are also glass-bottom boats at Aharen Beach.

As you can see there’s a lot to explore. If you’ve already been to Okinawa’s main island and are looking for something else, then I definitely recommend checking out the Kerama Islands.