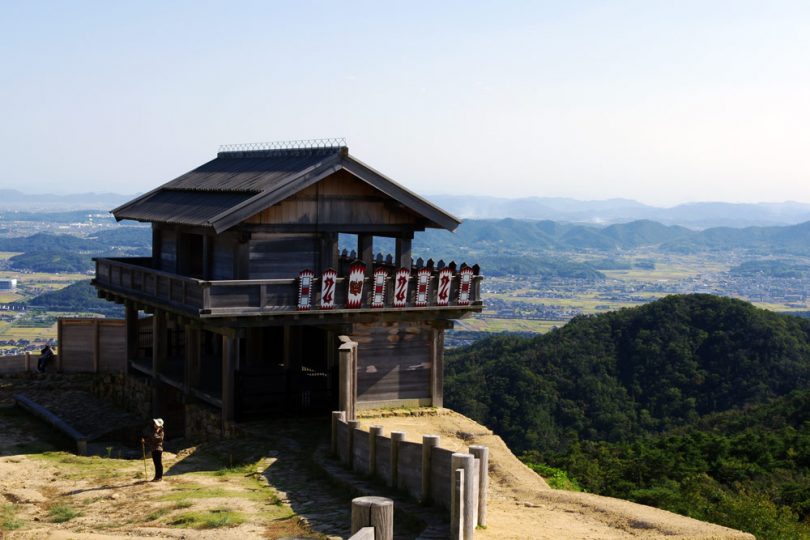 When you hear the words “Okayama” and “castle”, then you probably immediately think of the great “Crow Castle” (Okayama Castle). However, there’s another castle that you should visit as it might be the oldest in Japan: Kinojo Castle in Soja City. 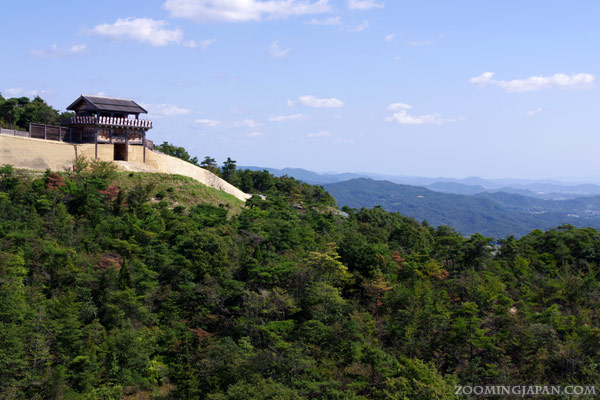 Kinojo Castle (鬼ノ城) is located in Soja City, Okayama Prefecture (map).
It’s very close to the Kibi plain, so you could easily visit both. However, if you use public transportation, you won’t have enough time for both in one day.

While the castle is in Soja City, the closest train station is “JR Hattori Station” (30 mins, 320 yen from Okayama). From there it’s a distance of about 5.5 km. It’s possible to walk. Or you can take a bus and get off at “Sunagawa Park”, then walk from there. Another option is taking a taxi, but that’s rather expensive – especially when traveling alone (~2000 yen).

Your first stop will be the Mt. Kinojo Visitor Center (鬼城山ビジターセンター).

There are about 70 parking lots if you come by car. Entrance is free and you’ll get lots of information about Kinojo Castle.

Furthermore there’s a roofed rest area, toilets, vending machines and you can grab a map before you leave to explore the castle ruins. 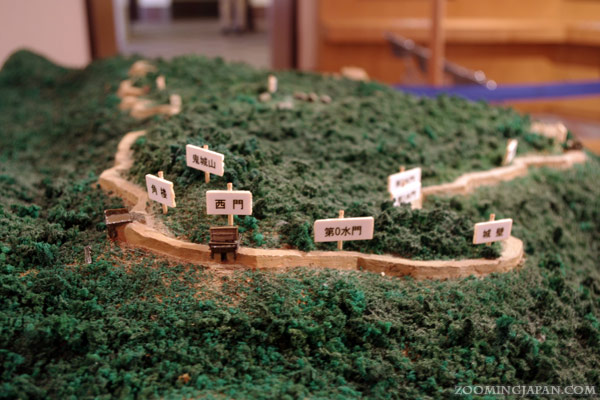 A miniature model of the castle ruins shows what’s still left nowadays – and where things used to be. 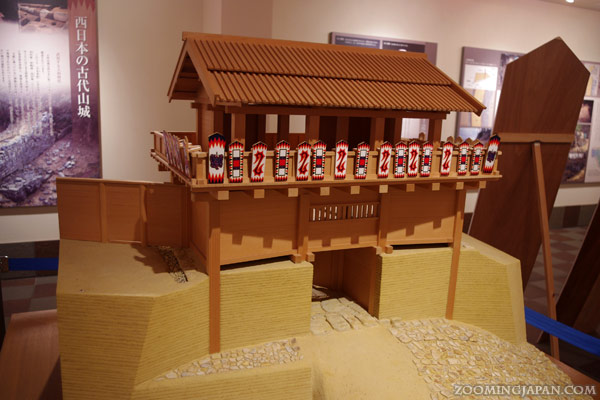 There’s also a rather big wooden model of the “West Gate” of Kinojo Castle. The real thing has been reconstructed and is about 400m away from the visitor center. 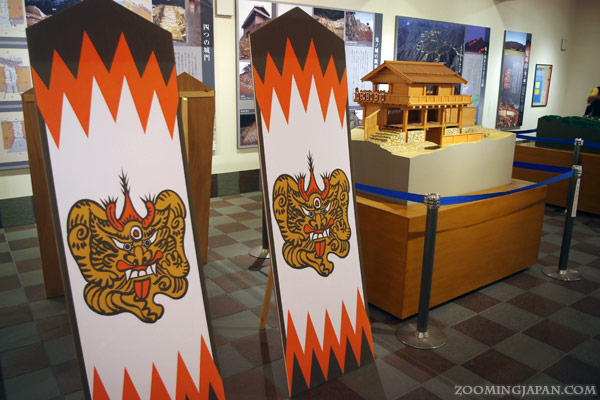 I’m not sure, but I think the banners show the “Demon” Prince Ura who once lived in Kinojo Castle according to an old folklore tale. I’ll tell you more about it towards the end of this article. 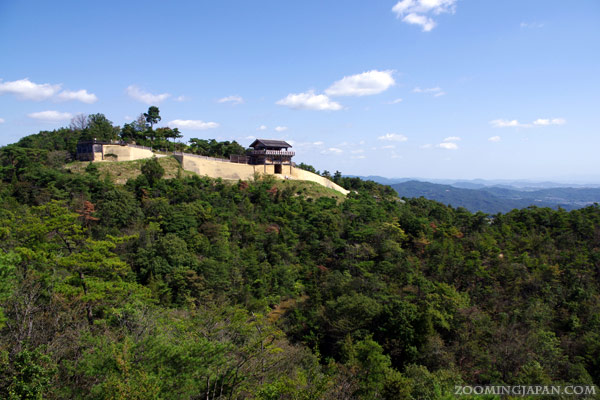 There are no historical records concerning Kinojo Castle and it was actually not discovered until 1971. Thus the theories about Kinojo Castle’s origin are vague. 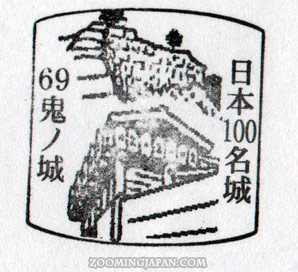 In the Nihon Shoki (日本書紀, The Chronicles of Japan, completed in the 8th century) is an entry saying there were 12 castles in Western Japan to defend the country from foreign attackers. It’s possible that Kinojo Castle was one of them.

According to researchers its construction began in 665 (A.D.). With all we know it’s currently thought to be the oldest castle in Japan. 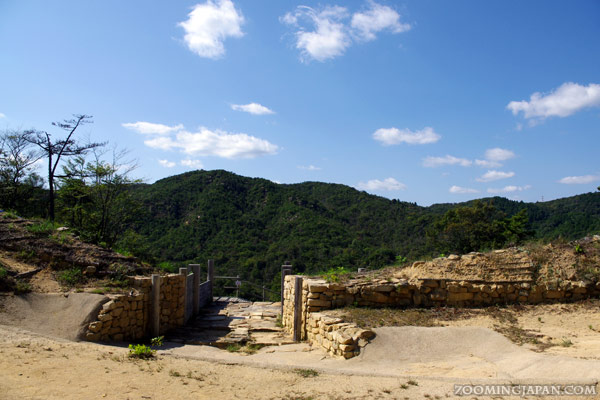 The castle is located on Mt. Kinojo. The castle walls are about 2.8km long, surrounding an area of about 30 hectar. The walls used to be up to 6m high and 7m wide.

There are four entrance gates as well as six water gates, but they’ve not yet been completely reconstructed. 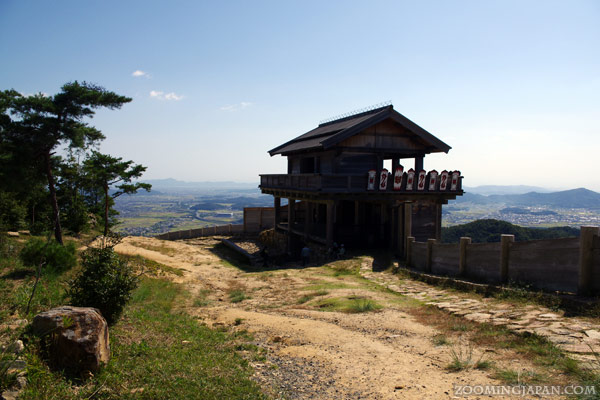 The only gate that has been completed is the “West Gate“. It’s the first thing you’ll see when walking from the visitor center (~ 400m). 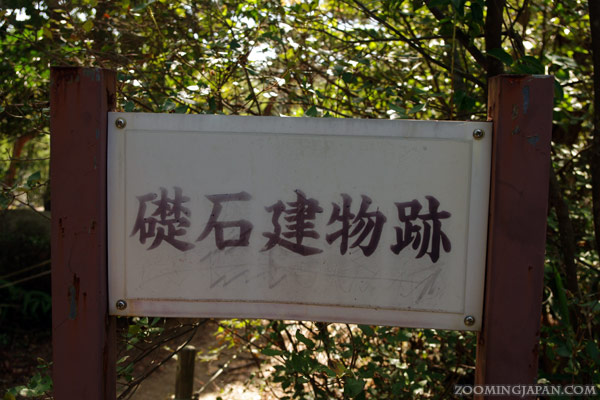 At the visitor center you’ll receive a map that marks all the spots of interest. Apart from the castle walls there are only very few ruins left. 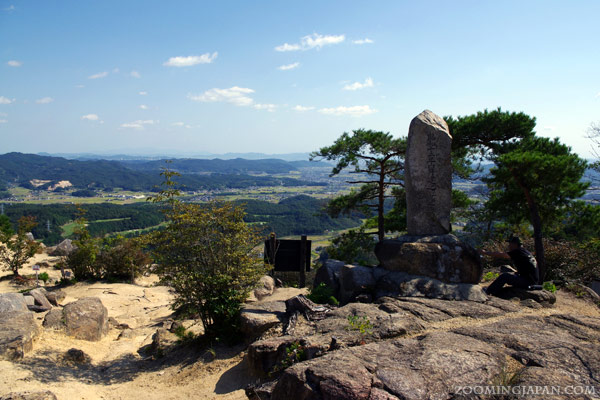 As the castle is located on a mountain, you’ll get a breathtaking view over Soja City. 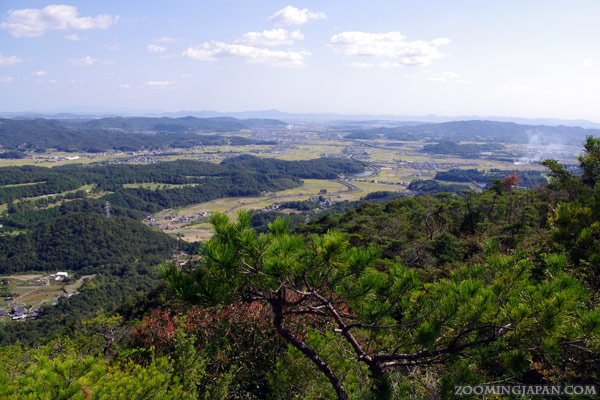 Even if you’re not particularly interested in the castle, hiking around the ruins and enjoying the view is already worth the trip! 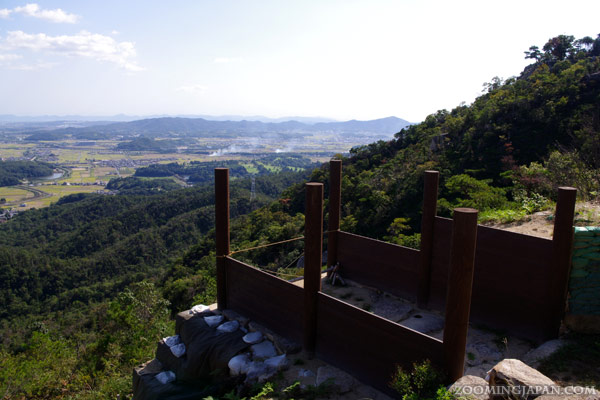 The “East Gate” is still under (re)construction.

There are several “power spots”. If you want to receive power, you can try to make your own stone pile. 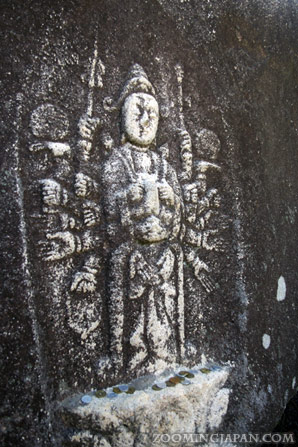 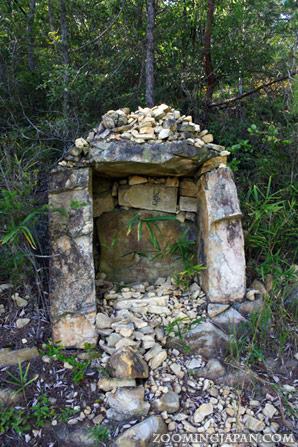 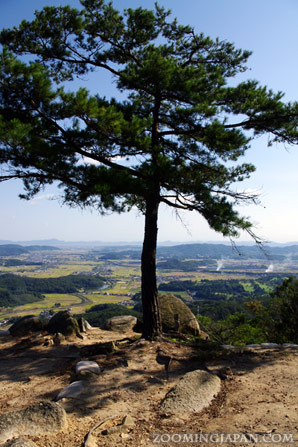 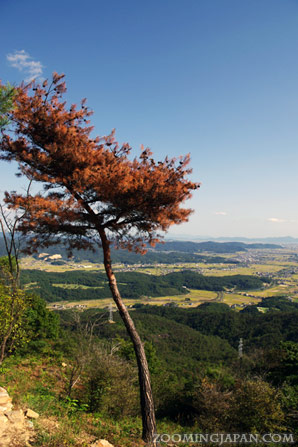 At the end of your hiking tour you’ll end up at the “West Gate” again. It’s not a very difficult or strenuous hike, yet I recommend wearing proper shoes. You can easily see everything in 1h. 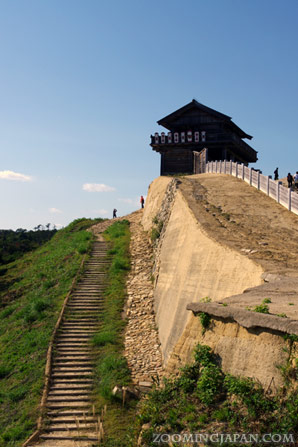 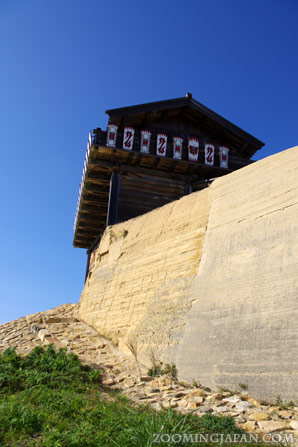 A lot of people sat down to eat and enjoy the view up there. If you take it slowly, then I’d rather calculate 2h instead. 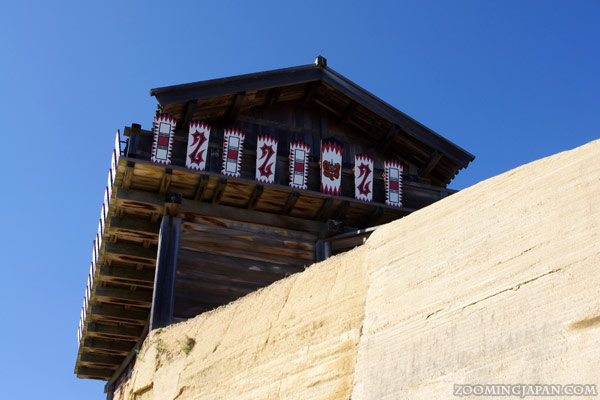 The “West Gate” seen from the outside. It looks quite majestic and impressive. 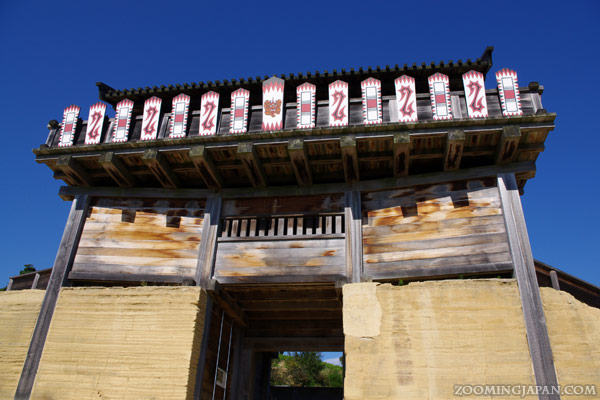 That’s how it looks when you’re about to enter Kinojo Castle through the West Gate. 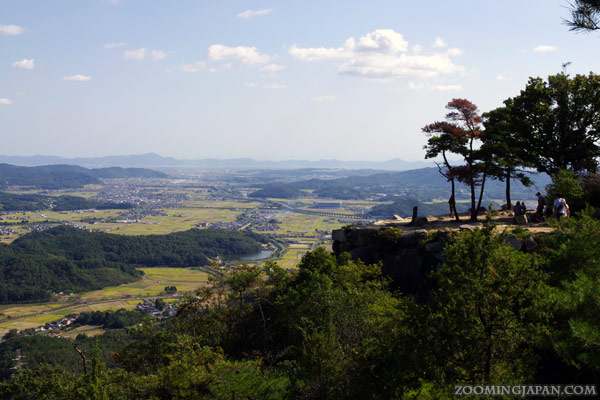 I’m sure you’ve heard about “The Tale of Momotaro“. Its origin can be found in Okayama, but very few people seem to know that it’s connected to Kinojo Castle:

According to the original myth, Prince Ura (温羅) of Kudara came to Kibi (Okayama) from another country (Korea). He built his new residence on a mountain and then started terrorizing the locals. That’s why people eventually called the castle “Ki(鬼) – no（の） – jo(城）” (Demon’s Castle).

In the “Tale of Momotaro” as we know it, Kibitsuhiko-no-mikoto who defeated Ura, is Momotaro who beat the demon. 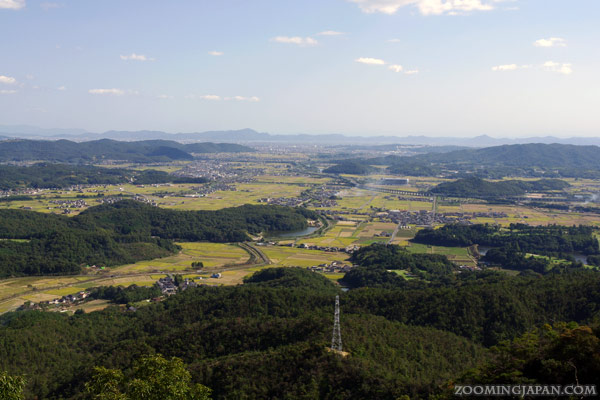 I suppose not many people know about Kinojo Castle.
Not everybody might be interested as there’s no “typical” castle tower left to photograph, but it’s surely worth a visit for castle fans!
If you have some spare time in Okayama – or if you’re visiting the Kibi plain – then it certainly won’t hurt spending half a day and go for a hike there.