Today I want to introduce “Ema” (絵馬) which are wooden wishing plaques of Japanese shrines.
I’m sure most of you have seen them when visiting Japan or on various photos, but you weren’t sure what exactly they are or what they’re called? 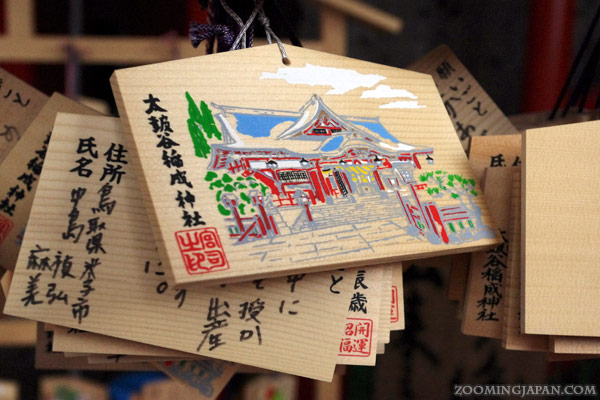 What exactly are “ema”?

“Ema” are wooden wishing plaques.
This is a Shinto custom and thus can be found at shrines all over Japan.
As Buddhism and Shinto have mixed up a lot, it is not unique to shrines. You MIGHT find them in temples, too!

In recent days people write their wishes or prayers on a wooden plaque that can be purchased at the shrine and then hang it up on the shrine grounds.
But where does this tradition come from?

The origins of “ema”

“Ema” consists of two kanji: 絵馬; the one for “picture” and the one for “horse“.
Horses were seen as the “vehicles of gods” (神の乗り物) and during the Nara period (710-784) people donated horses to the shrines so that the gods would be more likely to listen to their prayers and fulfill wishes.
However, horses were expensive and thus people who couldn’t afford it used horse figures made of wood, clay or paper instead. Finally the wooden wishing plaques with a picture of a horse on them were born.

During the Muromachi period (1336-1573) certain shrines started to display other things besides the horses, e.g. foxes at Inari Shrines.
Later during the Azuchi-Momoyama period (1568-1603) there were even “ema halls” (絵馬堂) where various artists displayed their ema design work. This can be compared to our modern art galleries.

In the Edo period (1603-1868) it finally became common that individuals could purchase very small plaques to communicate their wishes to the gods more conveniently.

Nowadays there are all sorts of pictures displayed. Very common is the current year’s zodiac (e.g. 2012 was the year of the dragon, so you’d see a lot of dragon pictures). Very often it’s the picture of a god or spirit that’s connected to the shrine.

However, in recent days basically EVERYTHING is possible. I’ve seen various anime and even Rilakkuma ones!! I guess those are especially popular among little kids. Very often you’ll find more than just one picture per shrine, especially in bigger ones.

When it is exam season, you’ll find mostly “goukaku” (合格) wooden wishing plates. Students all over their country wish that they’ll pass their tests.
Very common is also to pray for success in the next sport event, health, love, safe childbirth.

How to properly use an “ema”

Anyone can purchase the plaques. Usually they cost around 500-1000 yen. You purchase them at the small booth where you can also get a seal in your seal book or lucky charms. If nobody is around you just put the money in a box and take one of the plaques.
Yes, that’s Japan!
I guess they’re not worried that anybody would take one without paying!

With the money the shrine is also supported financially.

In big cities such as Tokyo you’ll find a lot of foreign languages on those plaques! A good place to check them out is Meiji Shrine!

If you’re interested to see more ema designs and want to know some more details, please proceed to PAGE 2!